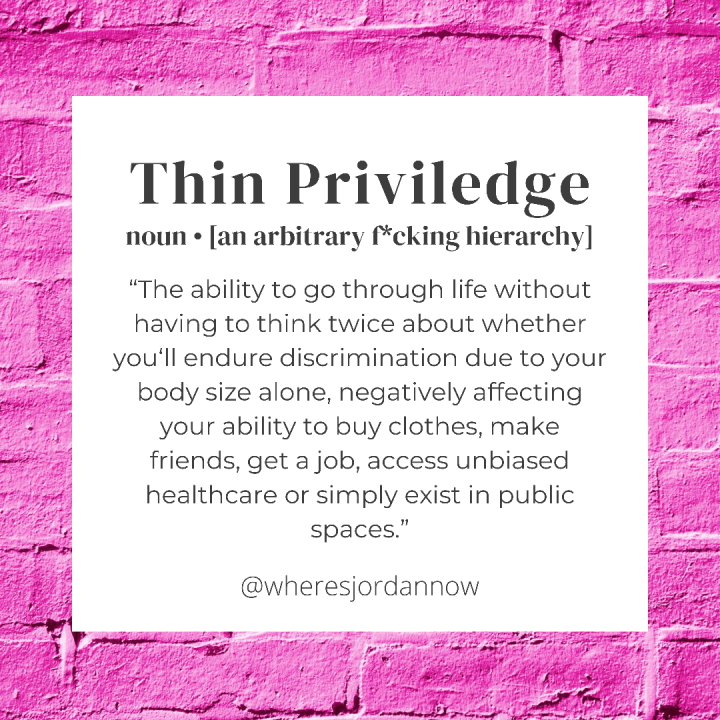 Having privilege doesn’t mean you’ve had an easy breezy fine & dandy life, or that you grew up in a mansion with a butler feeding you grapes.

It simply means you have traits that give you advantages in society, whether you realise it or not.

Some people don’t even realise they have an advantage because they’ve simply never had to think about it before, their privilege is normal to them.

It’s privilege to be visibly NOT FAT in a fat-phobic society because you’re automatically immune to the negative stigma & discrimination as a byproduct.

I want to quickly mention (for example) how the body positivity movement (which started as a fat rights movement, encouraging fat liberation) has been diluted a lot over recent years with those in small & straight sized bodies practicing body acceptance under the hashtag BodyPositivity.

These are often posts of straight and small bodied women who slouch in photos to get a shot of their stomach rolls, next to a photo of them pulling their gym leggings up to give the illusion of a flat stomach again & although well meaning, this is the definition of thin privilege, because fat people can’t just use camera angles or cover ups.

That’s not to say thin people have it fine & dandy either, thin privilege is born of diet culture and so by holding ourselves or others in higher regard due to body size, we keep feeding the beast that is diet-culture, encouraging body image issues & essentially harming everyone.

Privilege is intersectional which means you can have thin privilege but still face discrimination due to other traits such as the colour of your skin sex or sexuality, I’m in no way insinuating it’s not complex as fuck BUT…

Basically…being in a visibly small or straight sized body = automatic avoidance of the negative judgement & sometimes devastating bullying and negligence experienced by fat people day in, day out & therefore…is a PRIVILEGE.

Hello! I'm Jordan...a recovering hypocrite, helping diet-culture dropouts UNDO the damaging beliefs holding the back from a HEALTHY HAPPY relationship with their body and food.